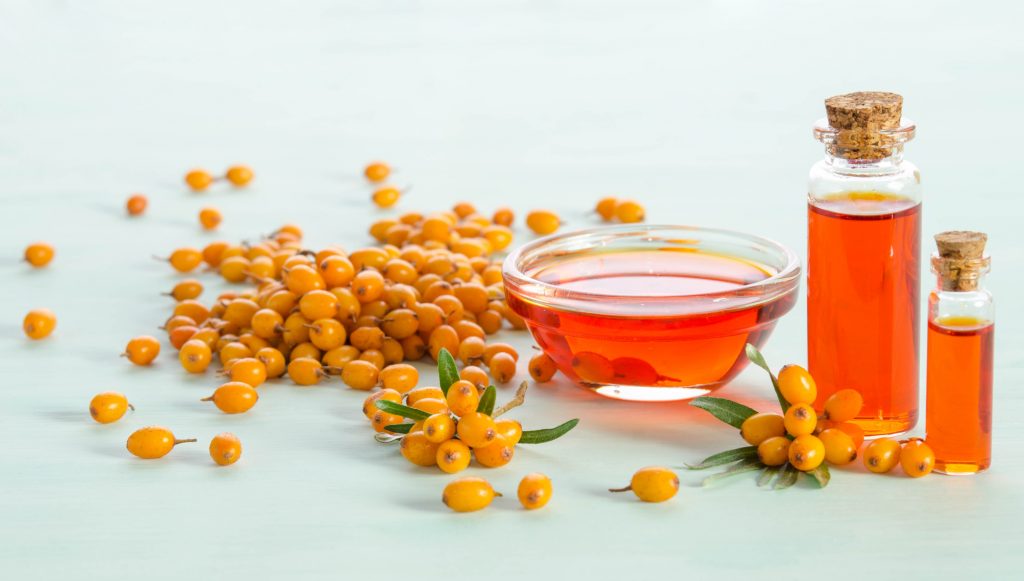 So what nutrients does Sea Buckthorn contain?

Derived from both the fruit pulp (from the berries) and the seeds, sea buckthorn oil is rich in a wide variety of nutrients, including vitamin C, vitamin E, and healthy plant compounds known as carotenoids, polyphenols, and flavonoids. It is also an excellent source of the healthy fatty acids omega 3, 6, 7 and 9. These nutrients contain antioxidant, anti-inflammatory, and/or lipid-lowering properties and directly contribute to sea buckthorn oil’s wide range of health benefits:

Although most all the attention regarding the health benefits of omega fatty acids has centered around omega-3’s, the ‘buzz’ surrounding the omega-7 known as palmitoleic acid has been growing. As one of the major plant sources of this fatty acid, sea buckthorn’s notoriety is also expected to grow.

What makes palmitoleic acid, or Omega-7, so special?

Palmitoleic acid is one of the most abundant fatty acids in our blood and tissues, particularly in fat and liver tissue. Although our body produces palmitoleic acid, it is mainly obtained through our diet. As an omega-7 fatty acid, palmitoleic acid has recently been shown to act as a ‘signaling’ molecule in our body, regulating several metabolic processes in the body and facilitating communication between fat and muscle tissue. This omega-7 fatty acid has recently earned a new and unique classification as a lipid(fat)-controlling hormone, giving rise to the scientific term lipokine4.

The discovery of palmitoleic acid’s role as a fat-controlling hormone appears to be in line with research studies demonstrating its ability to help manage Type 2 Diabetes. Abdominal fat is strongly linked to insulin resistance, a condition in which insulin becomes less able to lower the level of glucose (sugar) in the blood. Recent research supports a strong association between blood levels of palmitoleic acid and increased insulin sensitivity – this increased insulin sensitivity helps our body regulate blood sugar much more effectively5. Both our body’s natural production of palmitoleic acid and its dietary form have been linked to a reduced onset of diabetes, providing a potential preventative treatment option. In addition to its function as a lipid-controlling hormone, palmitoleic acid has been shown to influence the survival of insulin-producing cells in the pancreas, improving insulin secretion and directly affecting the cell’s ability to utilize glucose6.

Metabolic syndrome is a major contributor to cardiovascular disease risk and Type 2 Diabetes and is characterized by central obesity (apple shape), insulin resistance, elevated blood sugar, unhealthy levels of fat and cholesterol, and high blood pressure. Palmitoleic acid can be a potential treatment for metabolic syndrome because of its hormone-like effect on fat metabolism, its role of enhancing blood sugar sensitivity by protecting insulin-producing cells, its ability to improve healthy cholesterol and fat levels, and its role in managing blood pressure.

A study investigating the effects of dietary palmitoleic acid supplementation in individuals diagnosed with unhealthy fat and cholesterol levels showed significant reductions in the levels of both ‘bad’ cholesterol (LDL) and triglycerides and a significant increase in the level of ‘good’ (HDL) cholesterol. In addition, levels of an inflammatory compound linked to a higher risk of cardiovascular disease were also sharply decreased after taking the palmitoleic acid supplement9. Other studies, done on both humans and animals, revealed additional cardiovascular benefits associated with this fatty acid working in synergy with other anti-inflammatory/antioxidant compounds in sea buckthorn oil10. The combination of lipid-controlling effects of palmitoleic acid and the anti-inflammatory/antioxidant compounds in sea buckthorn oil have been shown to decrease blood vessel damage, improve blood vessel function, and counter arterial plaque formation in both healthy subjects and in those with cardiac and metabolic risk factors (i.e. obesity and Type 2 diabetes).

The National Institute of Health (NIH) just launched a long term study (July 2018) to determine the effects of palmitoleic acid-rich oil on heart health as well as on satiety and weight management. This clinical trial’s anticipated completion date is the summer of 2020. You can read more about the study at this link: Dietary Omega-7 Palmitoleic Acid-Rich Oil on Lipoprotein Metabolism and Satiety in Adults.

Palmitoleic acid protects the liver by decreasing the inflammation of fat in this organ11. Non-alcoholic fatty liver disease (NAFLD), which is defined as an excessive accumulation of fat in the liver, is one of the most common conditions associated with obesity and insulin resistance. A recent study using animal models concluded that palmitoleic acid supplementation led to a reduction in insulin resistance, decreasing both fat inflammation and  accumulation in the liver12.

Sea buckthorn oil’s unique blend of nutrients gives it a special ability to protect the skin and enhance the regeneration of skin cells. These compounds include palmitoleic acid and gamma-linolenic-acid (GLA), in addition to other nutrients that promote healthy skin, such as vitamins C and E, and carotenoids and plant sterols. GLA boosts the supply of nutrients and oxygen to the skin by improving blood flow and has demonstrated protective effects against skin infections, allergies, and inflammation. Palmitoleic acid has been used successfully in the treatment of burns, skin infections, wounds, and inflammatory skin disorders, such as dermatitis13.

The preventive and healing effects of sea buckthorn oil have been demonstrated in the treatment of stomach ulcers, reducing both their size and preventing their formation.

Sea buckthorn oil contains an abundance of unique nutrients, eliciting its widespread use in traditional medicine for over several centuries. Its reputation as a healthy omega fatty acid has just recently started gaining popularity in the Western world and research on palmitoleic acid is generating additional interest for consumers and medical professionals alike. As an important source of antioxidants and healthy fats, this oil has been shown to to benefit heart, blood sugar and skin health, and shows promise in helping with weight management, digestive, and liver health. As the results of additional research on sea buckthorn oil come to light, it may prove to be a an additional source of valuable omega’s and other nutrients to be incorporated into your daily diet.

Fearless Dietitian; 30+ years as a professional dietitian; Master’s Degree in Nutrition and Dietetics at the MGH Institute of Health Professions; Lead research dietitian for several major pharmaceutical companies; Currently focused on health and wellness and the benefits of ketogenic diets for both obesity and diabetes management. MS, RDN, CDE, LD/N

11 Nutrients in Walnuts Essential for Anybody on a Keto Diet